At the time of writing, at 78 metres in height, the Beckley Point building is the tallest building in Plymouth and the surrounding region. The 29.5 million pound project comprise of a 23 storey student accommodation building providing 507 beds and certainly imposing it’s presence on the Plymouth skyline.

At Hoist Hire, we were delighted to be involved at the early stages of the project and, through numerous meetings with the Kier project team, determined that we were to supply two Geda 1500z/zp Transport Platforms which offered the superb versatility that they required.

One of the key requirements of the Hoists was the ability to transport scaffolding in large quantities and with bespoke scaffold carrying attachments fitted, this is where the Transport Platforms excel when compared with fully enclosed Passenger / Goods Hoists. Scaffold providers Denholm were able to utilise both Hoists to transport numerous tonnes of their equipment all the way to the top of the impressive scaffold structure which they erected efficiently and speedily. Both Hoists were installed and dismantled progressively and in tandem with the scaffold erection / dismantle.

Kier then asked that the Hoists converted from scaffold carrying Hoists to Transport Platforms in order for them to carry passengers and other general building materials. The beauty of the Transport platform is the ability for the operator to switch between Goods only mode and Passenger carrying mode with the simple turning of a key. The generous sized 2.9m x 1.65m platforms enabled bulk moving of materials and passengers, which this project of such magnitude demanded.

It was a true pleasure to be involved in such a significant project for the city of Plymouth. The resulting impressive footprint on the skyline of the City of Plymouth has changed forever! 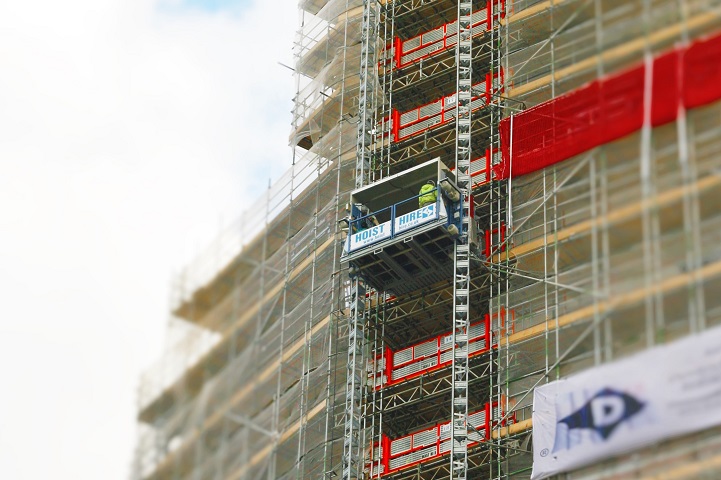